In this article five key challenges for treating carbapenem-resistant Acinetobacter baumannii are discussed. 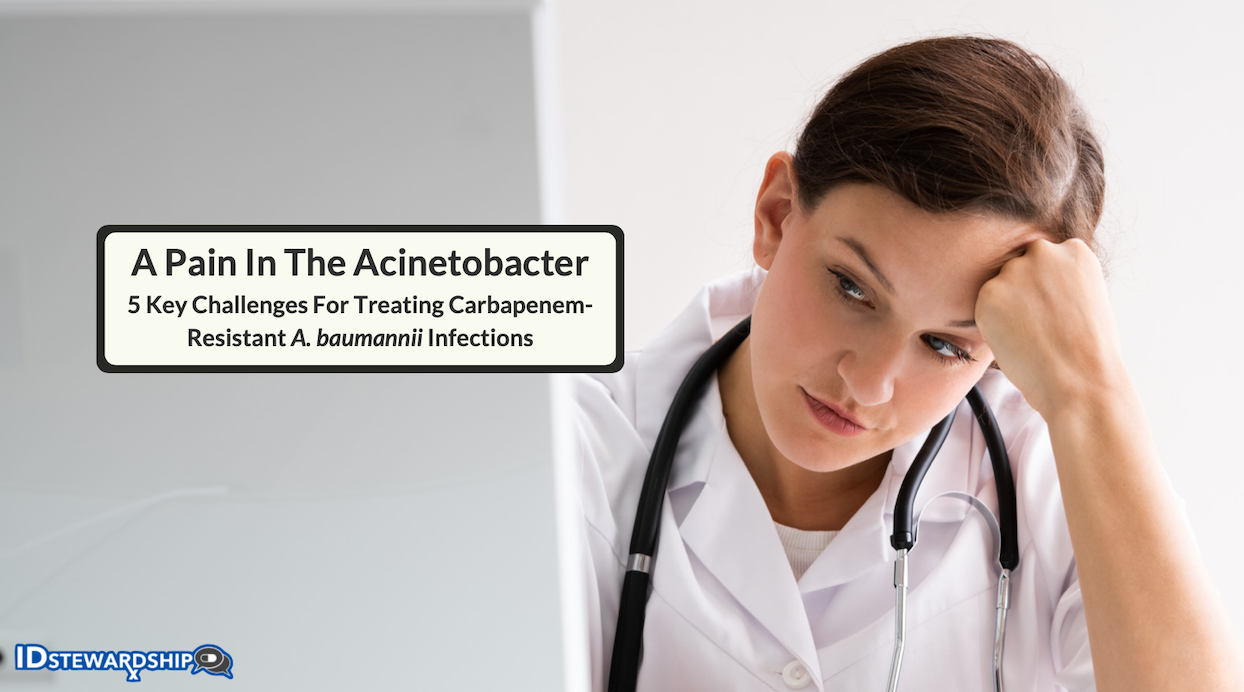 Acinetobacter baumannii is a major cause of nosocomial infections worldwide. It is one of the most common pathogens implicated in ventilator-associated pneumonia, and is also known to cause wound, urinary tract, and bloodstream infections. A. baumannii can be spread in healthcare facilities by contamination of patient care environments and healthcare providers’ hands. It can survive on these surfaces for long periods of time. It can be spread by asymptomatic colonized persons, making outbreaks difficult to control and lead to medical unit closure for extensive terminal cleaning.

Antibiotics that cover  pan-susceptible A. baumannii typically include ampicillin-sulbactam, piperacillin-tazobactam, cefepime, meropenem, imipenem-cilastatin, aminoglycosides, and fluoroquinolones. However, resistance to these agents is increasing. Carbapenem-resistant Acinetobacter baumannii (CRAB) is a multidrug-resistant organism that is resistant to many commonly used antibiotics, removing some of the least toxic and most effective treatment options.

The Centers for Disease Control and Prevention has deemed the antibiotic resistance threat level of CRAB to be urgent, which is the highest threat level. Data from 2017 showed that there were an estimated 8,500 cases of CRAB infection in hospitalized patients, including 700 deaths, and $281 million attributable healthcare costs. Infection control measures and appropriate antibiotic use are vital to mitigating the spread and development of this bad bug.

Photos of CRAB courtesy of @RichDavisPhD

Here in this article, I will explore some of the key challenges in managing CRAB, providing considerations on the diagnosis and treatment for the infections it can cause.

1. Sometimes CRAB causes disease, sometimes it is a colonizer

Two of the most common places to find CRAB in clinical practice are wounds and respiratory specimens. Assessing a patient’s clinical status for signs and symptoms of infection is highly important when it is isolated. Many patients who acquire CRAB infections have complex medical histories and differentiating a diseases versus colonization can be a tall order.

At baseline, defining ventilator associated pneumonia is difficult regardless of the pathogen involved. Therefore, when a patient requiring mechanical ventilation and sedation cultures out CRAB from a respiratory specimen, it poses a challenge to determine if it is a true pathogen that requires treatment, or if there is another cause when clinical decompensation occurred. Additionally, CRAB can be associated with polymicrobial infections, which further complicates honing in on a target offending pathogen, making picking optimal antimicrobial therapy even more challenging.

2. Being resistant to most antibiotics is a really big problem

Ampicillin-sulbactam has a unique mechanism of action, making it active against A. baumannii. Sulbactam is a beta-lactamase inhibitor that is typically given with ampicillin to protect ampicillin from beta-lactamase hydrolysis. However, ampicillin does not have activity against A. baumannii. Rather, it is the sulbactam component itself that has activity against A. baumannii by binding to penicillin-binding proteins with a low frequency of resistance. Ampicillin-sulbactam may be utilized in high doses for the treatment of CRAB. Resistance to sulbactam can occur, but the mechanism is not completely understood and it is thought to be driven by mutations in penicillin-binding proteins. Additionally, CRAB is often resistant to aminoglycosides and fluoroquinolones through additional resistance pathways such as enzymatic alterations and efflux pump mutations.

When we start to look at the existing options, drugs like the polymyxins can become legitimate options, but they come with a concerning rate of nephrotoxicity. Tetracyclines may also be an option, but tigecycline for example has a high incident of nausea/vomiting with may limit tolerance and the pharmacokinetic/pharmacodynamic profile of tigecycline is also less than desirable.

In recent years, there have been new antibiotics approved to treat multidrug-resistant organisms. Many of these antibiotics are beta-lactam/ beta-lactamase inhibitor combinations, such as ceftazidime-avibactam, ceftolozane-tazobactam, and meropenem-vaborbactam. These agents have been effective for infections caused by carbapenem-resistant Enterbacterales and difficult-to-treat Pseudomonas aeruginosa, and are associated with less toxicity than previously used broad-spectrum antibiotics such as aminoglycosides or polymyxins. However, none of these agents have activity against A. baumannii, necessitating the need for new antimicrobials able to combat multidrug resistant A. baumannii.

Other novel antibiotics with different mechanisms of action have shown activity against A. baumannii. Cefiderocol is a beta-lactam antibiotic with a unique mechanism of action. While most antibiotics enter the cell through porin channels, cefiderocol enters passively through porin channels and actively through iron transport systems, allowing it to overcome resistance caused by loss of porin channels. Additionally, cefiderocol is stable against hydrolysis by all classes of beta-lactamases. Cefiderocol is the only novel beta-lactam with in vitro activity against A. baumannii. However, results from the CREDIBLE-CR trial, which assessed cefiderocol against best available therapy for carbapenem-resistant Gram negative infections, showed higher rates of mortality in the cefiderocol group. The increased incidence in mortality was most prominent in the A. baumannii subgroup. The small sample size (n = 152) and open-label study design make these results difficult to interpret and makes the role of cefiderocol questionable in the treatment of A. baumannii infections.

Empiric antibiotic regimens typically cover common nosocomial pathogens, namely methicillin-resistant Staphylococcus aureus (MRSA) and Pseudomonas aeruginosa. Antibiotics utilized for empiric coverage most commonly include vancomycin for MRSA coverage in addition to an antipseudomonal beta-lactam, such as cefepime, piperacillin-tazobactam, or meropenem. Although these agents will cover A. baumannii if it is susceptible, carbapenem resistance will render all of these agents resistant. As a result, there is often a delay in initiating effective therapy, which can cause higher bacterial burdens that are more difficult to eradicate.

When reasonably feasible, infections due to CRAB should be identified quickly so that effective therapy can be initiated.

5. Combination therapy is often required for CRAB, but that can mean more toxicity risk

Antibiotics that can be considered for combination therapy include high dose ampicillin-sulbactam, minocycline, polymyxin B, extended infusion meropenem, and cefiderocol.

Ampicillin-sulbactam is given either as an extended infusion of 9 grams every 8 hours, or 27 grams as a continuous infusion daily (see IDSA guideline for full dosing details). Higher doses are utilized to saturate A. baumannii penicillin binding proteins. The IDSA suggests using ampicillin-sulbactam as a component of combination therapy when possible. One 2021 meta-analysis found that high-dose ampicillin-sulbactam in combination with a second agent is the most effective regimen to reduce mortality in critically ill patients infected with CRAB.

Minocycline is recommended at higher doses of 200 mg every 12 hours, and can be given intravenously or orally. Surveillance data have shown that 60-80% of A. baumannii isolates are susceptible and there are no clear signs of failure with its use, making it a reasonable treatment option.

Polymyxin B can also be considered, but conventional dosing is associated with highly variable concentrations that may not result in bactericidal activity. Additionally, there are warnings for nephrotoxicity and neurotoxicity associated with polymyxin B, making it a less than desirable option.

Extended infusions of high-dose meropenem at 2 grams every 8 hours given over 3 hours may also be used as part of a combination regimen for CRAB. However, IDSA does not recommend using meropenem with a polymyxin, as studies evaluating this particular combination did not show any benefit. Utilizing extended infusion meropenem with ampicillin-sulbactam is an option, but close monitoring would be required. This regimen puts patients at risk for additive beta-lactam toxicity, particularly neurologic adverse events.

Carbapenem-resistant Acinetobacter baumannii is a particularly challenging pathogen to treat. Due to its rapidly developing resistance mechanisms, many commonly used antibiotics have been rendered ineffective versus A. baumannii, leaving clinicians with limited treatment options. When deciding on antibiotics for combination therapy, it is important to consider the patient’s comorbidities and clinical status as well as pathogen susceptibilities to reduce the risk of adverse events and to ensure adequate coverage.

IDSA Guidance on the Treatment of Antimicrobial-Resistant Gram-Negative Infections: Version 2.0

ABOUT THE AUTHOR & MENTOR

After completing her PGY2 residency, Dr. Hassani hopes to practice as an infectious diseases specialist. Her practice interests include multidrug resistant gram-negative infections, opportunistic infections, and optimizing PK/PD of antimicrobials. Outside of work, Dr. Hassani enjoys going to concerts and movies, playing board games, and learning how to play the drums.

Debra Willner, Pharm.D., BCIDP is the Infectious Diseases Clinical Coordinator and Infectious Diseases PGY-2 Residency Program Director at SBH Health System in Bronx, NY. She went to LIU College of Pharmacy in Brooklyn, NY, completed her PGY-1 residency at NYU Winthrop Hospital in Mineola, NY, and completed her ID PGY-2 training at SBH Health System, where she currently works. Some of her areas of interest include antimicrobial stewardship, outpatient antimicrobial therapy, bacterial resistance, and exploring the use of play on words (😃 great job Bessma!). 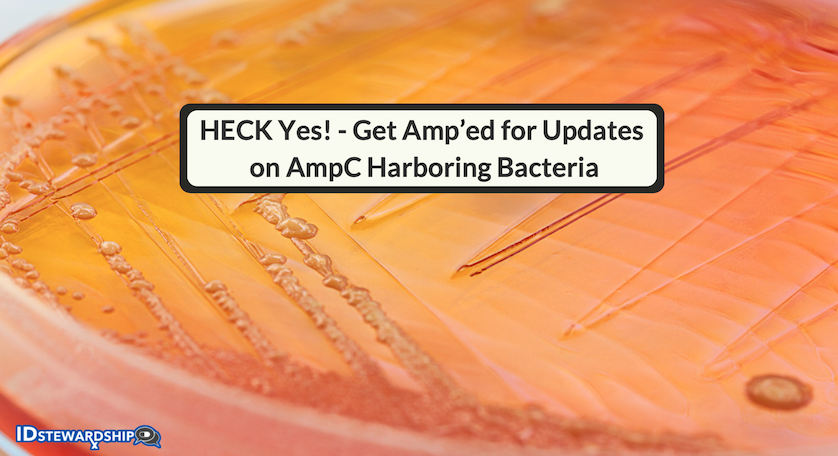