In this article an infectious diseases pharmacist resident highlights five things to know about the antifungal drug pipeline. 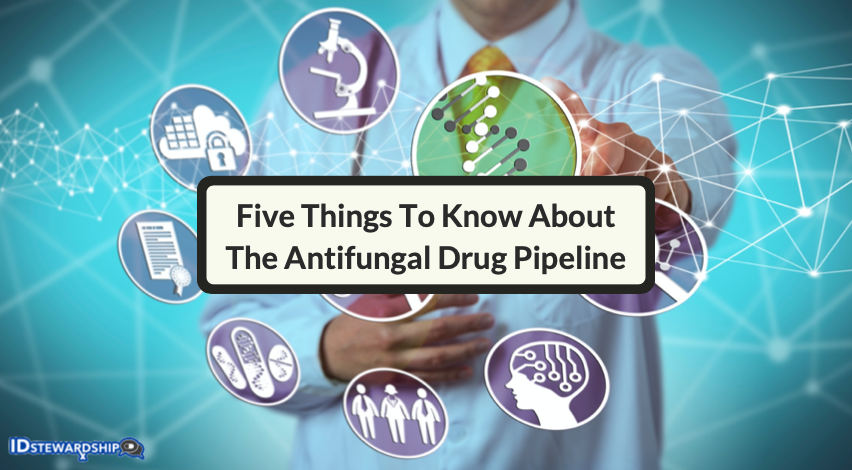 A special recognition and appreciation to William Alegria, PharmD, BCIDP for his mentorship and contribution to this article

Fungal diseases have become increasingly more prevalent, greatly starting with the HIV epidemic in the mid-20th century and continuing to rise with advancements in modern medicine and increasing numbers of immunosuppressed individuals. Fungal resistance to antifungal drugs is also a growing threat, secondary to selective pressure of antifungal drug use [1].

Antifungal drug development in the 21st century has left much to be desired, with no newly approved compounds since isavuconazonium sulfate in 2015. Additionally, the last novel antifungal drug class to be approved by the FDA was the echinocandins in 2001 [2]. The slow development of new antifungal agents can be partially explained by the fact that fungi possess eukaryotic machinery that closely resembles that of human cells [3]. Because of this, it can be difficult to identify pathogen-specific targets that spare off-target effects in humans.

Currently available antifungals can be grouped into five drug classes:

While these agents are critical in the management of fungal infections, they have several limitations, including drug-drug interactions, toxicities, and lack of oral options, to name a few. Additionally, there are pathogenic fungi with resistance to most or all available antifungals. Some of these difficult to treat fungi include azole-resistant Candida glabrata and Candida auris, azole-resistant Aspergillus, Scedosporium species, and Lomentospora (previously Scedosporium) prolificans [4-5].

For the first time in nearly twenty years, there are several antifungal agents with novel mechanisms in late-stage clinical development. Additionally, there are antifungals in the pipeline that improve on some of the current limitations of existing agents.  Below you will find my top five things to know about the antifungal drug pipeline. For a more detailed review of these agents, readers are directed to the references at the end of this article.

1. There are antifungals in the pipeline with novel mechanisms and enhanced activity against difficult to treat fungi

As mentioned above, there are various fungi that lack optimum treatment options, including azole-resistant Candida and Aspergillus and rare molds such as Scedosporium, and Lomentospora prolificans. Treatment of these infections remains challenging because of the limited susceptibility of these fungi to current antifungal drugs. Lomentospora prolificans, for example, is generally treated with a combination of terbinafine and voriconazole (even when voriconazole-resistant) and to no surprise patient outcomes are poor [6]. Thankfully, we now have agents in clinical development with activity against many of these difficult-to-treat pathogens. Two antifungals in the pipeline of interest owing to their enhanced spectrum of activity include fosmanogepix and olorofim.

Fosmanogepix is a first-in-class agent that works by targeting the fungal-specific enzyme Gwt1, which is responsible for an early step in glycosylphosphatidylinositol (GPI)-anchor biosynthesis. GP-1 anchored proteins covalently link to β-1,3-glucan and help maintain structure of the fungal cell wall. It is supplied as a pro-drug, metabolized in vivo into its active form of manogepix. Its broad spectrum of activity is particularly of interest, including resistant Candida (excluding Candida krusei), Cryptococcus neoformans, Cryptococcus immitis, Aspergillus species, Fusarium, Mucorales, and Lomentospora prolificans [4-7]. In vitro susceptibility testing using a large set of Scedosporium and Lomentospora isolates revealed that minimum inhibitory concentrations (MICs) were at least 10-fold lower than found in currently used drugs, including voriconazole [7]. Fosmanogepix is currently being studied in a Phase 2 clinical trial for invasive candidiasis and candidemia (SURGE trial).

2. There are antifungals in the pipeline with novel binding sites, overcoming cross-resistance

A major concern for the current antifungal repertoire is increasing development of resistance as noted previously. Candida glabrata and Candida auris are other pathogenic fungi where there are areas of unmet clinical need. Current guidelines suggest that an echinocandin be used as primary therapy for the treatment of C. glabrata due to the high rates of azole resistance; however, echinocandin-resistant C. glabrata have been identified and reports of development of resistance while on active therapy are becoming increasingly more common [9]. Echinocandins are recommended as first-line therapy for Candida auris infections as well by the CDC, although echinocandin-resistance has been identified in ~5% of C. auris isolates [10-11].

Resistance to echinocandins is usually due to mutations in one of two “hot spot” regions of the FKS1 or FKS2 genes. The FKS1 and FKS2 genes encode a subunit of the 1,3-β-d glucan synthase protein, the target of the echinocandin class. FKS1 and FKS2 mutants typically leads to pan-resistance across the echinocandin drug class [12]. Ibrexafungerp is an agent in the antifungal pipeline that may be able to combat some of these concerns.

Ibrexafungerp is a first-in class triterpenoid. Its mechanism of action and spectrum of activity is similar to echinocandins. It acts via 1, 3 B-glucan synthase inhibition, but this agent has a novel and unique binding site allowing multiple advantages to the echinocandins. These include retained activity against Candida FKS1 or FKS2 mutants (including echinocandin-resistant isolates of C. glabrata and C auris) and limited cross-resistance to echinocandins [4-5]. Ibrexafungerp is currently being studied in phase 3 clinical trials for acute vulvovaginal candidiasis (VANISH306 study) recurrent vulvovaginal candidiasis (CANDLE study), refractory invasive fungal infections (FURI study), and C. auris infections (CARES study). Both an oral and intravenous formulation are in development.

3. There are antifungals in the pipeline with fewer drug interactions and favorable tolerability profiles

If you thought the antifungal pipeline was looking promising at this point, here comes more excitement!

Most of the agents highlighted in this article are also advantageous from a tolerability standpoint compared to traditional antifungals. Novel drug targets and mechanisms of action specific to fungal cells are being discovered, resulting in improvements in tolerability profiles and fewer cytochrome P-450 (CYP)-mediated drug interactions [13].

The tetrazole class is of interest for the advantageous toxicity profile and fewer drug interactions, in comparison to traditional azole antifungals. Tetrazoles work like other azoles, by inhibiting the cytochrome P450 dependent enzyme lanosterol 14-alpha-demethylase, which converts lanosterol to ergosterol. What is novel about this class is that the triazole metal-binding group is replaced with a tetrazole, which accounts for greater selectivity for fungal lanosterol 14α demethylase (CYP51) [13]. This strong selectivity for CYP51 allows for fewer off-target CYP-induced drug interactions and an improved safety profile (including pregnancy and miscarriage concerns).

Oteseconoazole is the tetrazole closest to FDA-approval, currently being studied in phase 3 trials for recurrent vulvovaginal candidiasis. Mycovia Pharmaceuticals anticipates filing oteseconazole’s new drug approval (NDA) submission in the first half of 2021. Oteseconazole will likely find its niche in the outpatient setting for the treatment of vulvovaginal candidiasis [14]. There are multiple other tetrazoles to keep on your radar, including VT-1129 and VT-1598. VT-1129 maintains activity against Cryptococcus neoformans and Cryptococcus gatti genotypes with reduced susceptibility to fluconazole. VT-1598 has activity against endemic fungi, including Coccidioides, Blastomyces and Histoplasma [4-5].

4. There are antifungals in the pipeline with oral step-down options

Out of the current antifungals available, the azoles, flucytosine, and terbinafine are the only oral antifungal options. Lack of other oral agents can lead to extended hospital stays in some instances, such as in patients on two to four weeks of Amphotericin B induction therapy for Cryptococcal meningitis.

Amphotericin B cochleate is a new, oral formulation in the polyene class that is currently in phase 2 of clinical development. Amphotericin B cochleate has a multilayered structure that forms a solid, lipid bilayer and prevents gastrointestinal degradation, ultimately allowing for intracellular drug delivery [5]. Phase 1 studies have revealed an improved tolerability profile as well, with mostly mild gastrointestinal symptoms, sparing the renal and hepatic toxicities seen with the intravenous formulation of amphotericin [15]. Despite the advantages of this formulation, limitations to keep in mind include stability loss at elevated temperatures, precipitation during storage, and cost [5]. Clinical trials currently underway include a phase 2 clinical trial for refractory mucocutaneous candidiasis (CAMB trial) and a phase 1/2 trial for cryptococcal meningitis (ORACLE trial).

Of the other agents mentioned in this article, ibrexafungerp, olorofim, fosmanogepix, and the tetrazoles are also available as oral formulations.

5. There are OPAT options in the pipeline

The oral options mentioned above will be excellent outpatient therapy options, but in case you weren’t satisfied, there’s another noteworthy agent currently in phase 3 of clinical development. Enter rezafungin, a next-generation echinocandin. It is structurally similar to anidulafungin, but with a change in choline moiety that significantly prolongs the half-life and allows for once-weekly intravenous or subcutaneous administration [4].

Rezafungin has an excellent safety profile and limited drug interactions, like the other echinocandins. A potential therapeutic advantage of rezafungin in relation to the other echinocandins lies with the dosing strategy. In addition to being advantageous from a compliance standpoint, the front-loaded dosing is theorized to result in earlier fungicidal activity and reduced development of resistance while on therapy [4-5]. In the Phase 2 STRIVE trial, rezafungin was compared to daily caspofungin for invasive candidiasis. The primary endpoint of clinical cure at day 14 was similar between the caspofungin and rezafungin groups. One noteworthy finding was that the median time to a negative blood culture was 19.5 hours for rezafungin treated patients, compared with 22.8 hours for caspfungin treated patients [16]. Ongoing rezafungin phase 3 clinical trials include the ReSTORE study and the ReSPECT study. The ReSTORE study is evaluating once-weekly rezafungin versus caspofungin for invasive candidiasis and candidemia with an estimated completion date of August 2021. The ReSPECT study is evaluating once-weekly rezafungin versus standard of care (triazole plus trimethoprim/sulfamethaxozole) for prophylaxis for 90 days following allogeneic bone marrow transplant, with an estimated completion date of March 2022.

Current antifungals are limited by their toxicity profiles, drug interactions, available formulations, limited tissue distribution, and resistant pathogens. Additionally, the emergence of fungal resistance is a growing threat. However, the future of our antifungal drug repertoire is bright, with many agents in the pipeline targeting areas of unmet clinical need. Results of ongoing clinical trials will be eagerly awaited to determine the role in clinical practice for the agents highlighted in this article.

Additional acknowledgements to the excellent talk given on this topic by Dr. David Andes at IDWeek 2020.

Emily was born and raised in Glen Dale, West Virginia. She earned her Doctor of Pharmacy degree from West Virginia University School of Pharmacy in Morgantown, West Virginia. She then completed her PGY-1 pharmacy practice residency at Providence Portland Medical Center in Portland, Oregon. Emily is spending this year as the inaugural Infectious Diseases PGY-2 resident at Stanford Health Care. Her professional interests include antimicrobial resistance antimicrobial stewardship, and clinical practice research. In her free time, Emily enjoys biking and hiking, live music and musicals, and spending time with friends and family. You can find her on Twitter @FoxEPharmD. 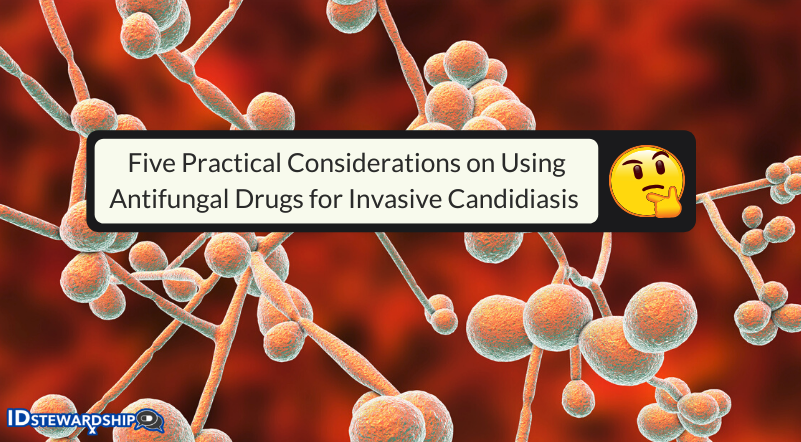