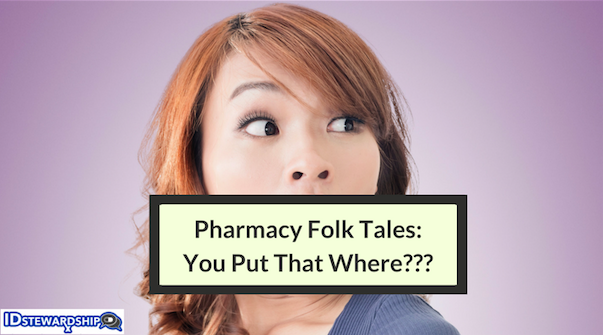 In every profession there are stories passed from one person to the next by word of mouth. Some are based in fact, others are more probable to have been the result of creative minds. When it comes to pharmacy folk tales there are quite a few out there sure to surprise you.

Here I review some folk tales I have come across in my time as a pharmacist. Some shared by pharmacists, some shared by pharmacy technicians, and others shared on social media. A few of them I know to be true, while others may just be myths. All have to do with improper administration of medications.

It is important to note that all of us can make simple mistakes, we are only human afterall. The point of sharing this is not to find entertainment at the expense of others, but rather to foster discussion and help remind us of the importance of patient counseling / becoming informed to ensure the safe and appropriate use of prescription drugs.

1. A patient picks up a package of suppositories from the pharmacy. A few hours later they call to complain, stating “these things taste terrible, do you have other flavors?” The pharmacist proceeds to explain proper administration of suppositories.

2. Similar to story #1, a patient comes to the pharmacy the day after picking up a a new prescription for suppositories. Upon approaching the pharmacist they inquire about when they can remove the suppository. The pharmacist informs them that it should dissolve and removal should not be necessary. It turns out the patient was not removing the outer foil packaging prior to insertion.

3. A female patient who takes an oral contraceptive (OC) becomes ill with the flu, including stomach ache and nausea. A few days into her illness she stops by a pharmacy to speak with a pharmacist. The topic of her OC comes up and she mentions that her boyfriend has been a “great guy” the last few days, even taking her birth control for her. The pharmacist then proceeded to explain a male taking a female’s OC is not an effective form of contraception.

5a. A patient comes to the window of the pharmacy to pick up her intra-vaginal contraceptive device, brand name Nuvaring. She proceeds to show her wrist to the clerk and comments on how she likes them so much she has not thrown her old ones away. Come to find out the patient did not know the product is meant to be intra-vaginal, she has been wearing them as bracelets. The pharmacist then counseled the patient on proper Nuvaring insertion and removal.

5b. A second Nuvaring story. The patient cut the product into 28 pieces and ingested one piece orally each day. The patient later found out this was not the proper way to use Nuvaring.

5c. A third Nuvaring story. A patient complains to the pharmacist that they are having trouble inserting the product. Come to find out she had not been removing the previous Nuvarings, which made inserting the new ones more difficult. She was counseled on proper removal of the product.

6. A patient presents to a pharmacist for counseling on their inhalers. One of their drugs is a medicine called tiotropium (brand name Spiriva Handihaler). This product comes as a pill and an inhaler device. The pill goes into the inhaler device, a mechanism punctures the pill, then the patient inhales its contents. During the counseling session the patient notes a lack of improvement in their symptoms despite taking the pill for several days. It turns out the patient has been taking the pill orally. The pharmacist counseled the patient on proper administration.

7. A female patient is diagnosed with bacterial vaginosis and fills a prescription for oral metronidazole. A few days later she stops by the pharmacy and informs the pharmacist the treatment has not been helping and that inserting the pill into her vagina is unpleasant. The pharmacist informed the patient it is meant to be administered orally, not vaginally. [Note: some oral medications can actually be effective when given vaginally.]

9. A patient is instructed to use epsom salt baths as a soaking aid. A few days later it is identified the patient misunderstood and was consuming the product orally rather than dissolving it in water for topical administration.

10. A patient with an allergy to their pet dog (or maybe it was a cat) is given allergy medication to  help their symptoms. The patient does not have relief in the first few days. Then during a discussion with pharmacy staff it is realized that the patient had been administering the medication to their animal rather than their self!

Have one to add? Email it to: IDstewardship@gmail.com