Do you like pharmacy and/or Pokémon Go? Well if the answer is yes, then this may be fun for you. Can you guess whether each of these is either a new antimicrobial drug or new Pokémon Go character? 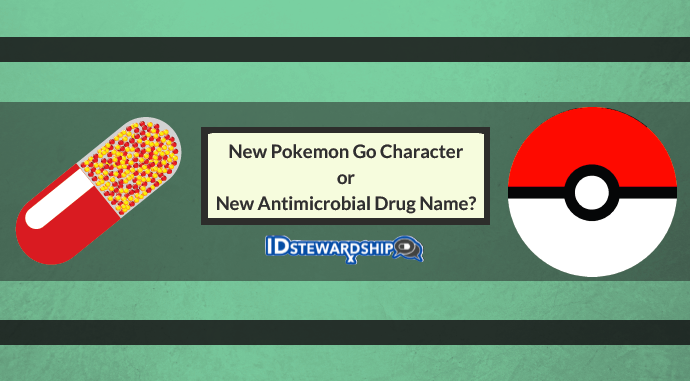 As a person born in 1984 I did not grow up watching the Pokémon television shows or playing with Pokémon toys, but I did grow up playing a lot of video games. Fast forward to late 2018 as a pharmacist in my mid-30’s and I am not surprised to still be playing video games from time to time, but I am surprised (maybe even a little embarrassed if I am being honest) that I enjoy the Pokémon Go game. Sure I am no level 40, but I do have 147 pokémon in my Pokédex from the Kanto Region!

Over the past year or so the new antimicrobials FDA-approved have been joked about on social media and amongst professionals, due to their seemingly peculiar brand names. Some new drug names sound like Lord of The Rings characters and some like Game of Thrones characters, but nearly all sound like Pokémon character names to me. Recently Pokémon Go just released a new batch of characters into the game’s virtual world. In turn, I thought it might be a good time to play a fun game: new antimicrobial drug or new Pokémon Go character?

Here is how it works. 15 names are listed here. Have a look at all of them. Study them. Think to yourself: is that a pokémon or is that a new antimicrobial drug name? Then, scroll down a little bit and you will have the answers. I know, it is not very technologically sophisticated, but hopefully it is fun and a little educational!

1. Zemdri – New antimicrobial. Zemdri was FDA-approved in June 2018. The generic name is plazomicin. It is an aminoglycoside antibiotic. Learn more about Zemdri here.

2. Bibarel – New pokémon. This is a water-type pokémon that looks something like a beaver. It sounds to me like it could be a new beta-lactam.

3. Xofluza – New antimicrobial. Xofluza was FDA-approved in October 2018. The generic name is baloxavir marboxil, which is an antiviral agent active against influenza. Learn more about Xofluza here.

4. Vabomere – New antimicrobial. FDA-approved in August 2017, Vabomere is the combination of meropenem (a carbapenem antibiotic) plus vaborbactam (a beta-lactamase inhibitor). If Vabomere were a pokémon it would be evolved from Merrem, which is the brand name for meropenem without vaborbactam. Learn more about Vabomere here.

6. Staravia – New pokémon. This flying-type pokémon is a bird with what looks like an Elvis haircut.

7. Carnivine – New pokémon. This grass-type pokémon looks like a venous fly trap mated with a box of party streamers.

8. Prevymis – New antimicrobial. Prevymis was FDA-approved in November 2017 and has the generic name letermovir. It is an antiviral agent with activity versus cytomegalovirus (aka CMV). Learn more about Prevymis here.

10. Empoleon – New pokémon. While it sounds as though it could be a drug for polio, this is in fact a large water/ steel-type pokémon that looks like a penguin with a three-pronged crown over its face.

11. Giratina – New pokémon. This character’s name reminds me a little of the HPV vaccine Gardasil, but it is actually a winged and six-legged ghost/ dragon-type pokémon. It looks a bit like a cockroach.

12. Luxio – New pokémon. Did the X get you? Many of the new antimicrobials have a V, X, Y, and/or Z in their names lately, but this is not a new antimicrobial drug. This electric-type pokémon looks like a cute fox/monkey.

13. Nuzyra – New antimicrobial. FDA-approved in October 2018, Nuzyra is a tetracycline antibiotic that has the generic name omadacycline. Learn more about Nuzyra here.

14. Lucario – New pokémon. This fighting/ steel-type pokémon looks like a fox who is into kick-boxing.

15. Mavyret – New antimicrobial. Mavyret was FDA-approved in August 2017. It consists of glecaprevir + pibrentasvir, which are two medications that work against the hepatitis C virus. Learn more about Mavyret here.

How many did you get? Share this with your friends for fun and to see if they can do as well as you! 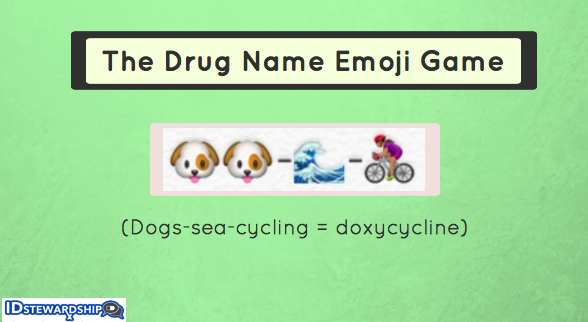