Manscaping and ladyscaping refer to the removal of body hair for cosmetic purposes. The location of such hair can vary, but commonly the pubic region is involved. Here, an infectious diseases perspective on this topic is provided to raise awareness of potential dangers. 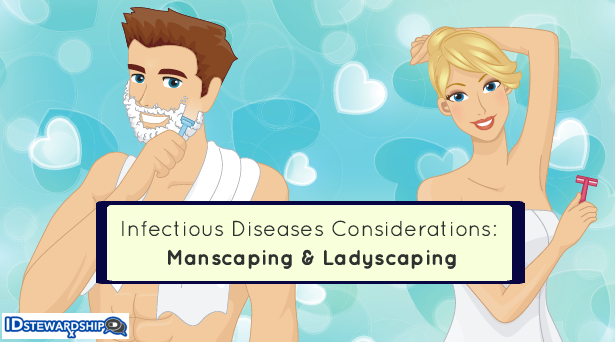 Combine the term landscaping with man or lady and you have today’s well-known terms “manscaping” and “ladyscaping.” These terms refer to the removal of body hair primarily for aesthetic or cosmetic purposes. The location of the hair can vary, but it is commonly the pubic region that is being discussed when the topic of manscaping and ladyscaping is at hand.

While this is not a topic people will regularly discuss in public, the practice of pubic hair removal is common, especially amongst younger adults [1]. In a study published in 2015 by Butler et al., of 1110 college students surveyed, 95% were found to have removed their pubic hair on at least one occasion in the past 4 weeks [2]. The most commonly reported method of removal in both men and women was shaving.

Beyond being common practice, pubic hair removal has cultural relevance. A review of pubic hair and sexuality published in 2009 found that the activity is important towards expressing sexuality and for participating in sexual activity [3].

Given that manscaping and ladyscaping has relevance to many people for a variety of reasons, identifying what infectious considerations are associated with the practice of pubic hair removal merits discussion. Further, being somewhat of a sensitive topic, it is unlikely that such discussion will take place outside of private forums, so putting it out here online can help get the message out.

Here are some infectious diseases-related considerations on the topic of manscaping and ladyscaping.

1. A clearer view can make it easier to identify problems

Removal of hair “down there” may serve to allow people to identify active physical manifestations of sexually transmitted infections (e.g., herpes ulcers). This is a positive.

Unfortunately, while there may be a clearer view, pubic hair grooming has actually been associated with increased sexually transmitted infections. Osterberg and colleagues surveyed a sample of 7580 people, representative of U.S. residents [4]. After adjusting for various confounders, they found sexually transmitted infections were nearly twice as likely in people who had groomed at least once in their life compared to those who never groomed. In addition, this association was stronger for persons identified as “extreme groomers” or “high-frequency groomers.”

Both itching and folliculitis (an infection of the hair follicle) have been associated with pubic grooming.

In the aforementioned study by Butler et al., genital itching was experienced on at least one occasion by 4 of 5 pubic hair groomers [2]. Itching was also the most common side effect reported.

Shaving or close grooming commonly leads to small cuts and nicks. Groom in challenging to maneuver areas and the risk of minor damage inevitably increases.

Have a sexual encounter while these are yet to heal and the chances of acquiring unseen infectious pathogens from a partner will increase. Compromise in the natural barriers is a major consideration in the spread of infectious diseases.

To minimize risks, preserving barriers and practicing other measures (e.g., using condoms) is a must.

It may sound like an obvious thing to not share equipment used for pubic grooming, but then again stories that defy the most basic logic principles pop up again and again.

The risk of acquiring H.I.V., hepatitis C, HPV, chlamydia, gonorrhea or other infectious pathogens from sharing razors or other tools used for manscaping and ladyscaping is unknown. Common sense tells us however, equipment used for pubic grooming should not be shared. In addition, it would seem logical to ensure tools are clean before applying them to the “nether regions.”

5. The act of manscaping and ladyscaping can risk trauma

Beyond the previous 4 points made, it is important to note the dangers of bringing a sharp edge to this area of high blood-flow and sensitivity. A little nick or cut may not be a substantial trauma, but an accidental slip of the hand may lead to irreparable damage. More substantial trauma during the act of shaving may also lead to infection if the wound is not cared for appropriately.

The practices of manscaping and ladyscaping are unlikely to decrease in frequency or cultural relevance any time in the near future. In the meantime while genital grooming remains common practice, those taking to the job should heed precautions to reduce their risks that may be posed.