Daptomycin plus ceftaroline may not be the first-line combination for Staphylococcus aureus bacteremia, but it can be an option for some cases. Here two pharmacists provide insights into this unique antibiotic combination. 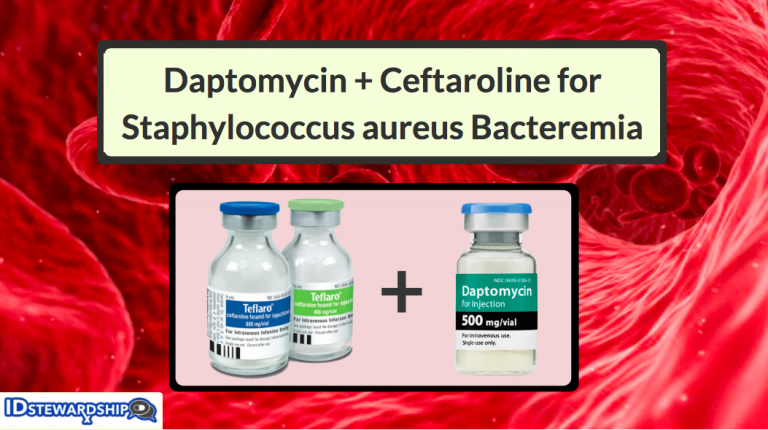 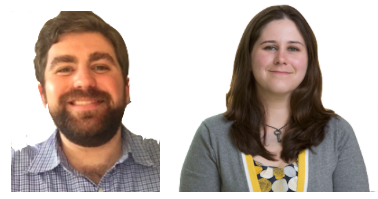 Multi-drug resistant (MDR) Gram-positive organisms are becoming increasingly prominent and more difficult to treat. One of the big problem Gram-positive bacteria is methicillin-resistant Staphylococcus aureus (MRSA), which is becoming gradually resistant to antibiotics clinicians have available within our our antimicrobial drug arsenal.

MRSA was first identified in the early 1960s and can cause a wide range of illnesses, from lung and acute bacterial skin and skin structure infections to bloodstream infections (aka bacteremia). The Centers for Disease Control and Prevention (CDC) estimate that in 2011 there were over 80,000 invasive MRSA infections and over 11,000 deaths due to MRSA [1]. Although rates of invasive MRSA are beginning to decrease, existing strains are becoming more resistant to commonly employed antibiotics such as vancomycin and daptomycin [1]. These resistant strains include heterogeneous vancomycin-intermediate S. aureus (hVISA), vancomycin-intermediate S. aureus (VISA), and vancomycin-resistant S. aureus (VRSA), with increases in resistance, respectively; and daptomycin non-susceptible (DNS) S. aureus [2,3].

There are a number of drugs that have been FDA-approved with activity against MRSA, two of which include daptomycin (Cubicin) and ceftaroline (Teflaro). These two agents are particularly notable because they each have indications for bacteremia secondary to MRSA (see table below). Daptomycin is the first drug with its unique mechanism of action, is now generic, and has been used for MRSA in clinical practice for many years. Ceftaroline is the first β-lactam approved with MRSA activity due to its action on penicillin-binding protein 2a (PBP2a), a protein that confers resistance to the other β-lactam agents. Combination therapy is utilized frequently secondary to decreased susceptibility and/or in cases that are persistent/refractory to primary or secondary treatment, including these agents.

To start off, here is a basic table comparing the two agents…

1. β-lactam combination therapy is not a new concept

The combination of daptomycin plus β-lactams in MRSA was first evaluated in vitro in a report published in 2004 [8]. There was even a study in 1994 that evaluated the effect of the combination of oxacillin with non-β-lactam antibiotics for MRSA synergy [9]. In short, the 2004 study showed synergy against MRSA when utilizing daptomycin plus a β-lactam when compared to either agent alone [8].

This synergy was evaluated in a report published in 2011 with seven clinical cases from three different institutions in which therapy with daptomycin plus a traditional antistaphylococcal β-lactam (nafcillin, oxacillin) was used for refractory, non-catheter-related MRSA bacteremia [10]. Despite a variety of conventional therapies, MRSA bacteremia persisted for a prolonged period of time (7-22 days) prior to the initiation of combination therapy. After combination therapy with daptomycin plus a β-lactam was introduced in these seven cases, MRSA bacteremia cleared within 48 hours [10].

2. Combination therapy with daptomycin plus ceftaroline is not commonly employed

In otherwise healthy individuals, vancomycin is the drug of choice for empiric coverage of MRSA infections requiring inpatient treatment [11]. Some other common options for serious S. aureus infections requiring inpatient treatment include linezolid, daptomycin, and ceftaroline. Unfortunately, vancomycin resistance has begun to increase within the past two decades [12].

Vancomycin inhibits bacterial cell wall synthesis by binding with high-affinity to the D-alanine-D-alanine portion of the cell wall precursor. Vancomycin is a unique antibiotic, in that the development of resistance took much longer than the other available antimicrobials commonly used for Staphylococcal infections [7]. The first clinical S. aureus isolate that showed decreased susceptibility to vancomycin was isolated in 1997 (VISA strain, termed “Mu50”), followed by the first clinical infection documented to be fully resistant to vancomycin in 2002 (VRSA strain) [12-14].

The mechanisms behind decreased vancomycin susceptibility in hVISA and VISA involve a series of phenotypic changes that include cell wall thickening, increased d-alanine-d-alanine residues, and a clogging mechanism with vancomycin itself due to its large molecular structure [15]. Although the mechanisms are similar, hVISA strains seem to be in a stage of resistance that precedes the development of a VISA strain with minimum inhibitory concentrations (MICs) reported in the susceptible range by traditional automated testing methods. This is secondary to the phenomenon where only a proportion of the colonies are in the intermediate-range within the larger sample being tested [2,17].

VISA is still relatively infrequent with reported prevalence of less than 3% of isolates [18]. Although hVISA is not commonly tested, prevalence has been reported in several countries and has been highly variable. In data from nine hospitals in the Unites States, hVISA prevalence was reported to be approximately 20% [19]. These hVISA infections contribute to persistent infections, including bacteremia.

Fully resistant S. aureus develops through gene transfer that occurs from Enterococcus (mainly VanA) that leads to a change from d-alanine-d-alanine to d-alanine-d-lactate, which renders vancomycin inactive [2,16]. True VRSA remains extremely rare in the United States [1].

Antibiotic resistance and/or persistence of positive blood cultures is a major driver for the consideration of daptomycin plus ceftaroline, but it is important to remember that these medications can be relatively expensive antibiotics. With a 500 mg vial of daptomycin costing roughly $250.00-$500.00 (brand versus generic; weight-based dosing) and a 600 mg vial of ceftaroline costing roughly $200.00 (typically dosed twice daily), it is no surprise that this combination is typically used only when more conventional and less expensive options fail.

3. The “seesaw effect” is something to be aware of

In order to understand the “seesaw effect,” one must understand the concepts behind MICs. The MIC of an organism is the lowest concentration of an antimicrobial that prevents the visible growth of a microorganism and is used on a daily basis in clinical practice to guide antimicrobial therapy. The “seesaw effect” is a phenomenon observed in Staphylococcus aureus in which the MICs of antistaphylococcal β-lactams decrease as the MICs of glycopeptides or lipopeptides increase. In other words, in vitro studies have shown that oxacillin/nafcillin or ceftaroline can have better activity against S. aureus as it becomes increasingly resistant to vancomycin or daptomycin [26-27].

One proposed mechanism of the “seesaw effect” can be explained by the correlation of resistance between vancomycin and daptomycin and an alteration in the expression of specific penicillin-binding proteins (PBPs) due to vancomycin and/or daptomycin selective pressure (28). Although not a universal finding, a decrease in PBP4 and PBP2a coupled with an increase in PBP2 (β-lactams have affinity) may explain the enhanced activity of ceftaroline [26,29-31]. In addition, studies have shown that nafcillin, oxacillin, and ceftaroline enhance the activity of daptomycin through multiple synergistic mechanisms, including in daptomycin non-susceptible organisms [20-22].

Pretty cool, huh? Either way, it makes us want to get on a seesaw. It’s been awhile.

4. In vitro data are promising

Although rare, increasing reports of daptomycin resistance are emerging. The mechanisms behind daptomycin resistance in S. aureus are not fully understood, but can be due to multiple changes in the cell membrane and cell wall, including changes in cell membrane surface charge, cell membrane fluidity, cell wall thickening, and alterations in cationic host defense peptides (a component of our innate immune system). Reports on daptomycin resistance to S. aureus have suggested that the bacterial membrane surface charge increases in positivity [3]. When daptomycin is administered, it forms a complex with calcium (a cation), rendering a relatively net positive charge on the molecule. As we can recall from general chemistry, opposite charges attract and similar charges repel; thus, the increase in positivity of the bacterial cell membrane makes it more difficult for the positively-charged daptomycin complex to bind and insert in the membrane to perform its antimicrobial activity [3].

However, in vitro data surrounding the use of daptomycin plus ceftaroline report synergy when these two drugs are used together, even in daptomycin non-susceptible organisms [20-22]. Reports have found a decrease in bacterial cell wall thickness, increase in daptomycin binding, and an increase in daptomycin-induced depolarization when using combination therapy (with ceftaroline) vs. monotherapy. Although not consistent with all available in vitro studies, adding ceftaroline to daptomycin is thought to enhance its mechanism of cell membrane binding by reducing the net positive membrane surface charge. Furthermore, ceftaroline’s ability to “damage” the bacterial cell wall could ultimately lead to increased rigidity of the bacterial cell membrane, thus restoring the susceptibility of daptomycin.

In addition to the above, it has been reported that nafcillin or ceftaroline exposure can increase activity of host-defense peptide human cathelicidin LL-37, enhancing killing by our innate immune system [21,23-24]. Although there have been in vitro reports of synergy between daptomycin with other β-lactams (i.e. oxacillin, nafcillin, cefazolin), ceftaroline actually has intrinsic activity against MRSA. Furthermore, the rapid and sustained reduction in bacterial inoculum observed with ceftaroline could lead to eventual de-escalation to ceftaroline monotherapy, such as in daptomycin (and methicillin) non-susceptible organisms [8,21,25].

These considerations may additionally contribute to why daptomycin plus ceftaroline is the preferred combination in spite of the significant costs.

5. We do not actually know if the combination therapy translates into better clinical outcomes

As I am sure you have now realized, the majority of the information we have is extrapolated from studies done in the lab, and real-life data on the combination of daptomycin plus ceftaroline are lacking; however, more is becoming available!

There are numerous published case reports that show that the combination of daptomycin plus ceftaroline can hasten clearance of refractory Staphylococcal bacteremia [32-34]. To our knowledge, the case series published to date with the most subjects evaluating the combination was released in 2014 [22]. This retrospective, multi-center study included 26 cases of refractory Staphylococcal bacteremia from 10 geographically and demographically distinct academic medical centers. Daptomycin dosing was documented at greater than 8 mg/kg in nearly 70% of patients, and ceftaroline was dosed at 600 mg every 12 hours in approximately 75% of patients. There were minimal adverse effects reported due to daptomycin or ceftaroline. However, it should be noted that one patient switched therapy due to eosinophilic pneumonitis attributed to daptomycin. Out of 23 cases in which microbiological information was available (daily blood cultures), bacteremia persisted for a median of 10 days on previous appropriate antimicrobial therapy (most commonly vancomycin or daptomycin). Bacteremia was cleared in a median of two days after the combination of daptomycin plus ceftaroline was started [22].

So, when could daptomycin plus ceftaroline be used in clinical practice? The MRSA Guidelines published in 2011 list combination therapy with daptomycin plus β-lactams as an option for patients with refractory MRSA bacteremia who have failed vancomycin [11]. However, it is important to remember that the studies evaluating the combination of daptomycin plus ceftaroline are either in vitro or retrospective in nature, which are obvious limitations. Furthermore, even though the combination therapy has shown promising results, it is unknown how long bacteremia in the available retrospective reports would have persisted if the patients were continued on previous therapies and not switched to the combination. Another limitation and confounding variable that was not reported in all of the available studies was if source control was obtained or, if obtained, when it occurred relative to the initiation of the combination therapy, as this of course could play a role in clearance of the bacteremia.

Although the mechanisms make sense and it has been shown that this combination works in vitro, it is always important to treat each patient individually, incorporating days of persistent bacteremia, levels of resistance, and whether or not source control has or will be obtained prior to recommending this therapy. Also, never forget to implement appropriate antimicrobial stewardship.

An interesting question that remains is whether this combination needs to be utilized for the entire treatment duration; some in vitro data suggests that this may not be the case and that patients may be transitioned back to monotherapy to complete therapy [35]. 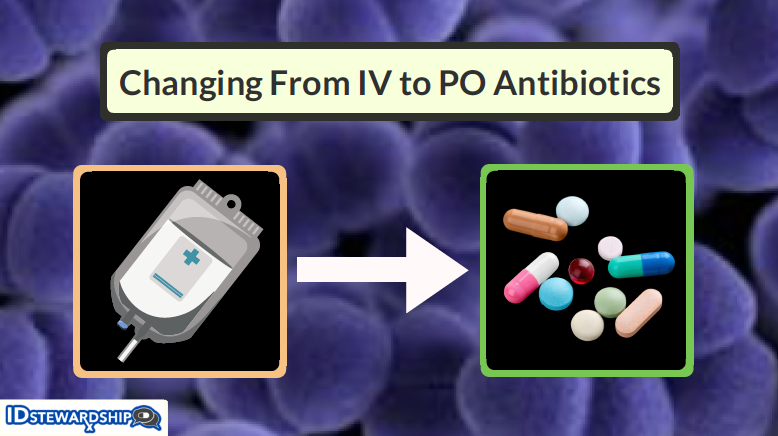