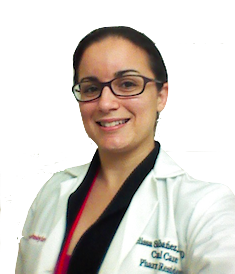 Melissa Santibañez, Pharm.D., BCCCP, is a South Florida native who received a bachelors of science degree from the University of Miami (Coral Gables, FL) in 2008 followed by a doctor of pharmacy degree from Nova Southeastern University (Fort Lauderdale, FL) in 2015. During and prior to her time in pharmacy school she gained vast experience in the hospital pharmacy setting, including serving as a pharmacy buyer. As a fourth-year pharmacy student she completed the 6-month Advanced Clinical Experience Program hosted by Jackson Memorial Hospital (Miami, FL), an intensive program intended to strengthen clinical skills and prepare students for post-graduate residency training.

Dr. Santibañez completed a PGY1 Pharmacy Practice Residency at the University of Illinois at Chicago (Chicago, IL) in June 2016, followed by a PGY2 Critical Care Pharmacy Residency at NewYork-Presbyterian Hospital (New York City, NY) in June 2017. She was an Assistant Professor within the Department of Clinical and Administrative Sciences at Larkin University College of Pharmacy (Miami, FL) for 3.5 years. Currently, she is an Assistant Professor of Critical Care within the Department of Pharmacy Practice at Nova Southeastern University College of Pharmacy (Fort Lauderdale, FL) with a clinical practice site at Memorial Regional Hospital (Hollywood, FL).

She continues to be active in scholarly activity and her current practice areas of interest include antimicrobial stewardship in the intensive care unit, hemostasis and reversal of anticoagulation, heart failure, and pharmacist burnout.

In her spare time, Melissa is a practicing martial artist, having trained in seminars under the grandmasters in Muay Thai kickboxing, Filipino Kali and Eskrima, and Wing Chun Gung Fu. She also occasionally goes mountain biking and competes in obstacle course races, most notably the Ragnar Relay race from Miami to Key West in 2014.

Myths And Facts Of Being A PGY1 Pharmacy Practice Resident

A Look at Piperacillin/Tazobactam Versus Carbapenems for ESBL Infections