In this article Dr. Jeff Boden of the global branding consultancy Kaleio, Inc. (who developed the name molnupiravir) provides some history on molnupiravir – the new COVID antiviral named after Thor’s Hammer. 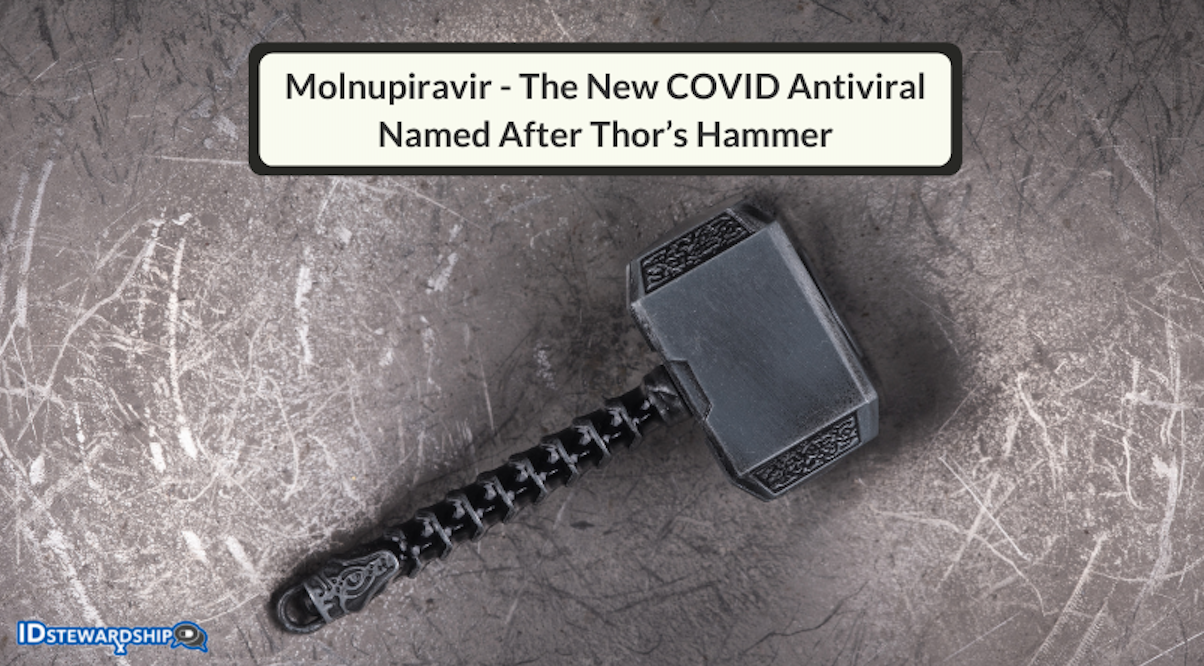 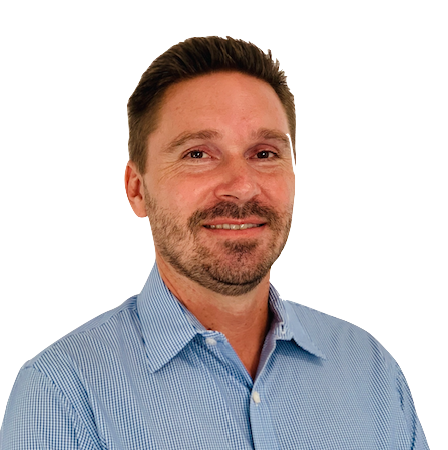 On October 1st, Merck and Ridgeback Biotherapeutics announced that molnupiravir (MK-4482, EIDD-2801), an investigational oral antiviral medicine, significantly reduced the risk of hospitalization or death at a planned interim analysis of the Phase 3 trial in at risk, non-hospitalized adult patients with mild-to-moderate COVID-19.  They report at the interim analysis that “molnupiravir reduced the risk of hospitalization or death by approximately 50%; 7.3% of patients who received molnupiravir were either hospitalized or died through Day 29 following randomization (28/385), compared with 14.1% of placebo-treated patients (53/377); p=0.0012.” Formal publication of the data is pending.

Molnupiravir was named by Kaleio in the early days of the coronavirus pandemic.  The primary mechanism of action of molnupiravir is induction of lethal mutagenesis by incorporation of the 5’-monophosphate metabolite into the viral RNA genome.  Because molnupiravir is resistant to the proofreading exoribonuclease encoded by coronaviruses, it is able to prevent viral propagation via viral error catastrophe, for which no defined nomenclature exists in the INN/USAN system.

The naming of antivirals can be challenging.  In general, antiviral compounds are assigned to the –vir stem class.  However, antiviral nomenclature is subdivided into over 30 unique substems describing a variety of mechanistic attributes and structural moieties.  As a uridine nucleoside prodrug, we first focused on stem classes that were most closely structurally aligned with MK-4482/EIDD-2801, which included

Each of these stem classes is home to agents that are also used as antineoplastics, and there was a strong desire from the drug development team to obtain a name that clearly illustrates the antiviral properties of the compound.  This would be challenging, given that the CA Index name of MK-4482/EIDD-2801 is “uridine, 4-oxime, 5′-(2-methylpropanoate),” lending itself toward classification as a –uridine antiviral.

Delving into the –vir stem class, we were able to identify two compounds that made use of the -piravir suffix, an undefined group of RNA-dependent RNA polymerase (RdRp) antivirals.  The -piravir suffix appears to have been originally created to allude to either pyrazine or pyramidine structural compounds.  Although the mechanism of action of MK-4482/EIDD-2801 is not that of an RdRp inhibitor, the -piravir suffix was determined to be the best strategy for obtaining a true antiviral stem (vir). 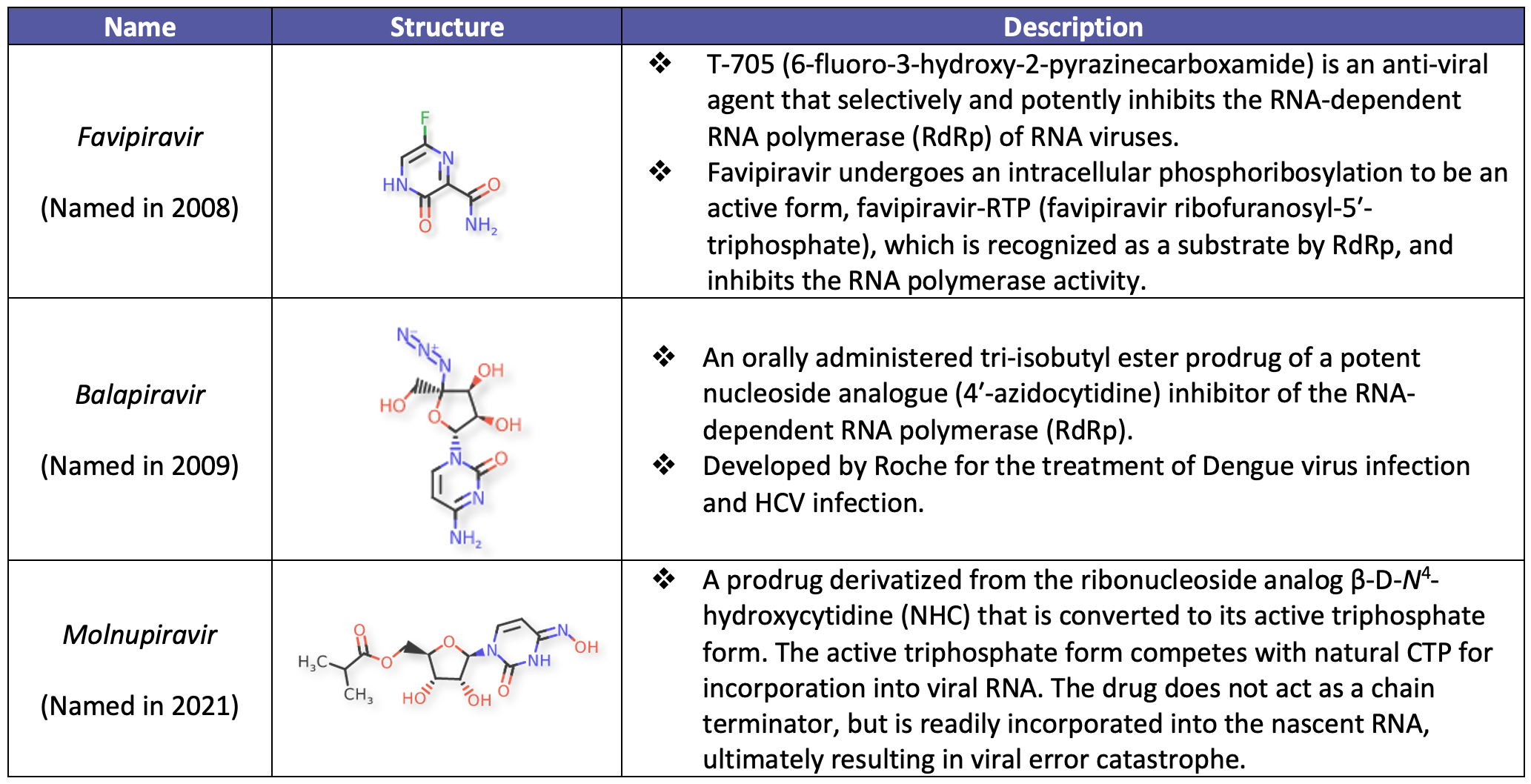 As discussed in previous articles, submitting companies are allowed to submit suggested name candidates for consideration by the USAN Council (AMA/FDA) and INN Expert Group (WHO).  Working with the -piravir suffix, we set out to create unique prefixes that were in line with the compound development team’s aspirations.  The primary creative direction was to construct a name that evoked the power of Thor’s hammer – named Mjölnir.

In Marvel Comics, Thor is the Asgardian God of Thunder and a founding member of the Avengers who wields a powerful hammer called Mjölnir (pronounced Miol-neer).  A variety of names alluding to Mjölnir were ultimately proposed for consideration as the official nonproprietary (generic) designation for MK-4482/EIDD-2801 and in the end molnupiravir was selected by USAN/INN.  The name was formally published as a recommended INN in February 2021 and adopted as a USAN in April.

With Merck planning to submit an application for Emergency Use Authorization (EUA) to the U.S. FDA as soon as possible, let’s hope that molnupiravir will take us one step closer to driving the final nail in the coffin for COVID-19. 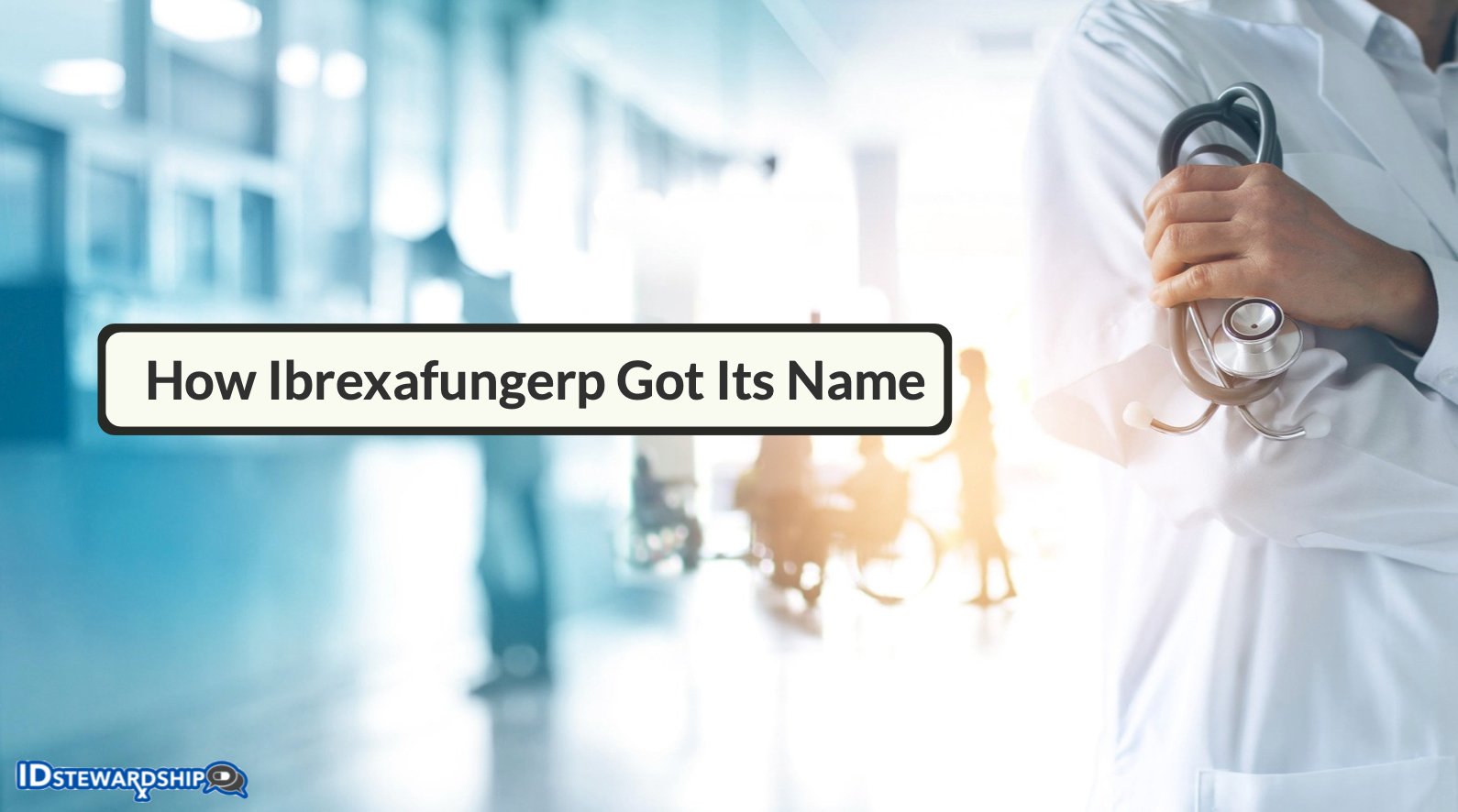