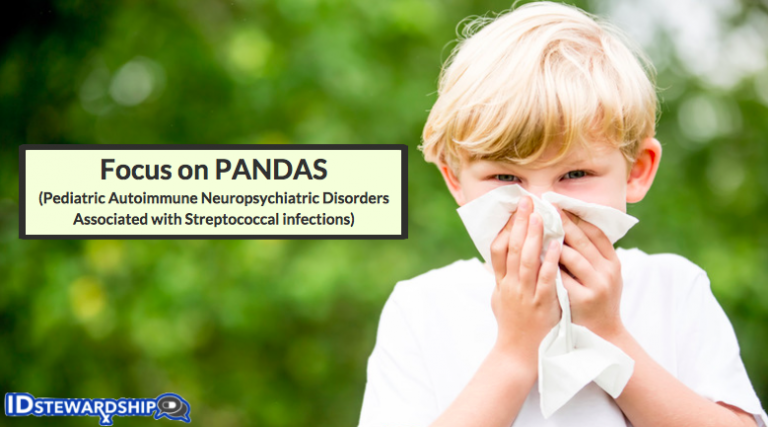 Watching TV is not one of my regular activities, but every now and then something catches my attention. Not long ago this happened with a 20/20 episode on ABC News in which a child was screaming the word “PANDAS.” It caught my eye, because it reminded me of some of the patients I have come across during my years practicing as a pharmacist. The episode is available here if you want to check it out.

Viewing the show I realized how much people (including clinicians) are unaware of this debilitating condition that affects not only patients, but also care givers and family members. In considering that this is a topic not many people are familiar with, I thought it may be a worthwhile endeavor to write an article about it here.

In this article I review information about Pediatric Autoimmune Neuropsychiatric Disorders Associated with Streptococcal infections (PANDAS). It should be noted that clinical controversies related to this topic exist and an exhaustive review of the literature is beyond the scope of this article. Readers are directed to the references and suggested resources at the end of this article for more information.

Sydenham chorea (SD) is a neurological pediatric disorder post-GAS infection like PANDAS, but SD is characterized by choreiform movements. About 30% of prior GAS infections in SD cases are acute rheumatic fever which subsequently results in persistent cardiomyopathy (rheumatic carditis) such as valvular incompetencies. PANDAS does not typically result in such sequelae.

Syndromes with similar clinical presentations to PANDAS, but with a non-Streptococcal infectious trigger are described as Pediatric Infection-Triggered Autoimmune Neuropsychiatric Disorders (PITAND).

PANDAS is more prevalent among children from ages 3 years to puberty and is rare amongst adolescents over theage of 12 years. According to the PANDAS Network, PANDAS/PANS affects about 1 in every 200 children. GAS infection rates are found to be higher during the winter months which is also observed among children with PANDAS exacerbation.

While PANDAS is still a controversial diagnosis, the original National Institute of Mental Healthdiagnosis requires that all five criteria are met (Swedo, et al., 1998):

The association between Sreptococcus pyogenes and some pediatric neuropsychiatric disorders such as OCD, tics, or Tourette syndrome has been a subject of debate among researchers and clinicians. While there are more definitive animal models for SD pathophysiology, that for PANDAS is still in development.

Mell LK and colleagues found a significant association of PANDAS with prior Streptococcal infections in the three months before onset date. The risk was higher amongst children with multiple streptococcal infections within twelve months. Exposure to S. pyogenes antigens (specially 5 main strains M12, M22, M5, M3, and M89) during infections triggers host production of several antibodies, including ABD, ASO, ACHO, ABGA. Some of these antibodies have been found to last longer in the host than the others. Since there is a molecular mimicry between the immune response to S. pyogenes and brain tissue, these antibodies can cross-react and lead to the production of antigens within regions in the basal ganglia to induce lysoganglioside, tubulin, and CaMK II (calcium-dependent calmodulin protein kinase II) autoantibody activities, which in turn stimulate the production and release of dopamine at dopamine receptors. This results in onset and exacerbation of movement and behavioral disorders.

Kirvan CA suggested that infection or the antibody itself may affect the blood-brain barrier. In addition, evidence of association of GAS infection recurrence and higher risk of PANDAS suggested the possibility of an antibody threshold needed to trigger symptoms. It may take more than infectious occurrence and/or an occurrence with certain severity to induce antibody levels to the threshold in which symptoms will occur.

The cause of PANDAS continues to be researched and debated.

Is being a GAS carriers a risk factor for PANDAS?

Pharyngitis or Strep throat is a common infection among school-aged children. Transmission occurs through large respiratory droplets, passing the infection to other children or making them asymptomatic carriers. One carrier can pass the bacteria onto the next.

S. pyogenes is classified as extracellular pathogen. It causes pharyngitis by adhering to and invading the epithelial cells. This internalization may contribute to antibiotic treatment failure and the persistent carriage, as well as a negative throat swab. Carriers may continue to have anti-streptococcal immune response with persistently elevated antibody levels in the presence of the organism colonization. This at first glance,appears to pose a risk for developing PANDAS at some point once the antibody levels reach their threshold if the “antibody threshold” is proven to hold true.

While the 2012 Infectious Disease Society of America Guidelines do not recommend antibiotic therapy for asymptomatic carriers, the 2015 American Academy of Pediatrics Committee on Infectious Disease Guidelines recommends S. pyogenes colonization eradication in several situations such as a family history of rheumatic fever or rheumatic heart disease, or community outbreaks of S. pyogenes pharyngitis. The questions of whether the persistent elevated antibody levels present a constant risk of PANDAS onset in these children and whether these children should be treated for S. pyogenes eradication remains to be answered.

As PANS and PANDAS display highly similar clinical manifestations, the 2017 PANS Research Consortium guidelines treat both as a single entity. The goal is to achieve remission with minimal corticosteroids.

aNon-Streptococcal infections: treatment is based on guidelines for that specific infection

dRituximab and MMF can be alternative therapies to TPE. If patients cannot tolerate MMF, mycophenolic acid (MPA) can be used.

Immunization is recommended for both patients and family members. Standard childhood vaccines should follow recommendations from the Centers for Disease Control and Prevention, the American Academy of Pediatrics, and the American Academy of Family Physicians. Adenotonsillectomy should be limited to those recommended for the general population such as sleep-disordered breathing or frequent GAS infections due to the lack of available prospective controlled trials. Currently, there is no evidence of clinical benefits from probiotic and vitamin D.

What does the future hold?

A well-designed animal model for pathophysiology study of PANDAS will help us create more definitive criteria for earlier diagnosis in order to appropriately manage this condition early on. Prospective randomized controlled trials with longer follow-up periods are much needed to determine clinical benefits of currently recommended therapies in the guidelines. There are still conflicting data with these therapies. Garvey MA et al, 1999 and Murphy et al, 2017 did not find antibiotic treatment to be effective in either preventing GAS infections, hence avoid exacerbation of psychiatric symptoms, or reduce the symptom severity and frequency. In contrast, Murphy et al, 2015 found positive effect of antibiotic treatments. Other current therapies have similar ongoing research progression. Another aspect that has not yet been looked at is the long-term complications from some of these treatments among these children during their adulthood.